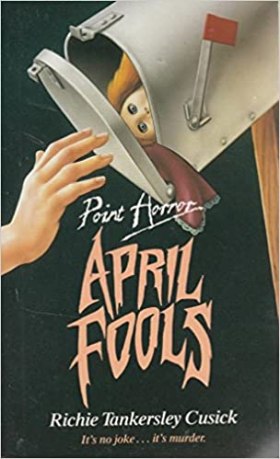 On the night of April 1st, Belinda, Frank, and Hildy are driving home from a party when they get involved in a gruesome car accident. The people in the other car never could have survived the wreck, so Frank insists they take off. After all, what happened wasn’t really their fault.

Two weeks later, Belinda is the only one who still feels guilty about the accident. Then the “pranks” begin. Someone sends her a bloody doll’s head. A car nearly runs her off the road.

Obviously someone witnessed . . . or survived that car accident. And they’re going to make her pay . . . slowly . . . for what happened.

April Fools’ Day is over. But these jokes are for real.

I’ve been a little hesitant to tackle RTC again, since her previous two books didn’t live up to my memory when I recapped them. I remember this one pretty well, helped along by several other recappers writing/podcasting about it. I remember Frank and Hildy being absolute assholes, but Belinda being a pretty good protagonist.

For some reason, I think I always found this book a little boring when I was younger, but I clearly read it multiple times – the spine on my old copy is pretty well-worn. And clearly my memory of Cusick’s books isn’t reliable, considering how much eight-or-nine-year-old me loved The Lifeguard. (I’m still cringing over that.)

END_OF_DOCUMENT_TOKEN_TO_BE_REPLACED

Description: Dressed to kill. Martha knew there was something evil about the house she was moving into. It was so cold . . . and creepy. And it wasn’t just the house that was giving her a weird feeling. Martha was sure someone was following her . . . watching her every move.

Then the practical jokes began – the scarecrow with a carving knife in its head, the fire. And the phone calls: “Trick or treat, Martha . . . you’re dead.”

It was October, but these were no Halloween tricks. Someone would be coming home this year with more than just a bag of treats. And Martha was the prize.

Wow, October 1989? I was eight years old when this book was published. I don’t remember the first time I read it, but it had to have been when I was around 11 or 12. My copy is old and stained all to hell with soda that leaked out of take-out cups. I used to take shit care of my stuff when I was around that age.

So, let’s start with that description real quick. Are they really saying that a fire is a practical joke? A fire?! Yeah, that’s not a joke, wtf. Also, the abuse of dashes and ellipses you can clearly see in the description carries on throughout the book. Or at least throughout the first three chapters, which is as far as I’ve read as I type these words. Based on Dove and Wing’s recap at The Devil’s Elbow, I’m aware that this trend does in fact carry on the entirety of the book. Yay.

So, this is one of those books that I know I enjoyed as a teen. I remember it really well, even though it’s somehow inextricably linked in my head to Bebe Faas Rice’s The Listeners and Music from the Dead. I think there’s a similarity in stories, but it’s mostly the covers. Those three covers look very similar.

Anyway, since this is RTC, I’m already second-guessing my memory of liking this book. Remember the hell we went through with The Lifeguard? I’m gun shy on all Richie Tankersley Cusick novels now. But I swear I liked this one, guys. I swear I did . . . .

END_OF_DOCUMENT_TOKEN_TO_BE_REPLACED

Tagline: Don’t call for help. He may just kill you.

Description: A summer of sun, sand – and murder. Kelsey’s summer should have been paradise: An invitation to rich and famous Beverly Island, complete with sun-drenched beaches and three gorgeous lifeguards on duty.

But Kelsey’s summer is the opposite of paradise. It starts with the note under her pillow from a girl who’s missing. Then there’s the crazy man in the lighthouse who won’t leave Kelsey alone. And there have been a number of suspicious drownings . . .

At least she has the lifeguards around to protect her . . .

Poor Kelsey. Someone forgot to tell her that lifeguards don’t always like to save lives.

Well here we finally have it, folks – a book I have actual nostalgia about on my nostalgia recap site! This is the one that kicked it all off for me, but before we get to that, can we talk about this cover for a hot minute? The lifeguard on the cover looks about thirty-five; is he supposed to be one of the boys in the book? He looks like Harry Hamlin. What the fuck.

Okay, so I’m pretty well convinced that this is the first Point Horror I ever read, at the tender age of 8 or 9 years old. I had a friend at the time who lived across the street and was three years older than me, so she had all the creepy books. I borrowed this from her and read a good portion of it before she knocked on my door and told me her mom was making her get it back from me because she thought I was too young to be reading it. Baby Me was frantic – I had to find out who the killer was! This was not fair! So I did something I haven’t done since – I flipped to the back of the book and read the end so I would know who the bad guy was. The shame still burns bright. Also, it didn’t make a lot of sense without reading all the chapters that came before the end. So, some number of years later (I’ll be damned if I can remember how many), I got hold of The Lifeguard again and read the whole thing, without any nosy friends’ moms telling me I couldn’t! Ha! I have great affection for this book, so I was thrilled to read a recap of it at The Devil’s Elbow recap site, and then listen to a Teen Creeps podcast episode on it. None of these ladies seem to have the same affection for it that I do, however, which was quite an affront to my inner 8-year-old self. (Don’t worry, I’ve gotten over it. We’re all friends here.) Clearly nostalgia is a key factor in enjoying this one. As of this very second of me typing these words you’re reading with your very own eyes, I’m exactly halfway through rereading the book, and . . . yeah, not gonna lie, it’s kinda rough. I’m sure 8-year-old me would be punching 36-year-old me in the face right now, but . . . this book is not the fine piece of literature it was in my memory. Ah, well. Onward and upward, right? (Note from Future Me: Nope. There’s nowhere to go but down, straight into the deepest reaches of Hell. Pray for me.)